Ever wonder who plays the corpse on your favorite crime show, or how they find jurors for the ensuing trial? And where do they get those big crowds when you have a scene at football game, concert or even a shopping mall? These people are Background Actors, commonly referred to as Extras. Chances are you don’t pay much attention to the seemingly random customers in the bank commercial or the waiting room patients in Grey’s Anatomy. This is largely due to the fact that a big part of a Background Actor’s job description is simply to blend in.

What is a Background Actor or Extra?

A Background Actor is someone who performs in a nonspeaking role, usually in the background of a scene – hence the name. Having people in the background helps to make TV shows, movies, and other productions look and feel more real. Remember the eerie pictures of empty NYC streets in 2020? Nothing ever made a case more clear for just how absolutely essential background actors are!

In a typical shooting season, the big Background Casting agencies will book hundreds of Background Actors every day in shows like: She-Hulk, Anatomy of A Scandal, The Lincoln Lawyer, Good Girls, Cobra Kai, The Cleaning Lady, Killing It, 9-1-1 and more. For all of these shows city streets, sporting events, court rooms and hospitals would all look like movie sets… or even kind of weird and creepy, without Background Actors to add life and personality.

What do Background Actors do?

There’s no one single job description that’s going to cover every scenario for a Background Actor because your role will literally change from set to set.

One day you may be riding your bike along a boardwalk (and chances are it will actually be your own bike!) and the next hanging out in the halls of a courthouse. The big thing to remember is that Extras / Background Actors are typically directed by the Second Assistant Director, on set referred to as the 2nd AD. (For more on film terms read: 53 Film Terms Actors Need To Know to Survive On-Set

Your role may involve walking around the set and even crossing in front of the camera, interacting with other Background Actors, (silently) and maybe even some contact with the principal actors. Working as background talent gives you a unique opportunity to get real, on-set experience while being paid. It’s often a valuable stepping stone to becoming a lead actor.

How To Be A Background Actor: The Complete Guide

On Set / On Location Etiquette — Do’s & Don’t Even Think About It!

Don’t Even Think About It!

Being professional, reliable and courteous and sensitive to any minors on-set. Doing this will make sure you get called back on future projects.

Again, every set and every production is different, so adapt accordingly, but there are a few things that can make your day or night on set a whole lot more comfortable.

You are usually asked to bring several changes of clothing, so pay attention to wardrobe guidelines. Have your duffel / garment bag  organized with your name clearly labeled or tagged.

Almost all filming days run into over-time so be prepared!

For more essential film terms to know before heading to set read:

Featured Extra
Someone who is still considered a background performer, but is potentially recognizable but they are NOT speaking.

Photo Double
A non-speaking Background Actor or Model taking the place of a Principal Actor, when the Principal Actor is unavailable and seen partially. (Photo Doubles are often used for nudity and body parts i.e. great legs or hands)

Stand-in
A Background Actor going through the actions or standing where the Principal actors will. Stand-ins are always similar height and appearance to the main actor and will often wear similar wardrobes the crew can set up shots and check lighting. *Note: Stand-ins are paid at a higher rate

Silent Bit
A Background Actor interacting with the principal such as, bumping into them or pointing out a direction. No lines.

Day Out of Days
A.D. schedule assigning time slots for when certain people or things will work on set

P.A.
Production Assistant. A Production Assistant’s tasks can and often vary from day to day but generally they are responsible for printing and distributing scripts, running errands for Directors and Producers and relaying messages between members of the crew + cast to make sure everything runs smoothly.

Taft-Hartley Law (U.S. only)
Allows non-SAG actors to work under a union contract for their first role. After that, you must join SAG.

Voucher
A paper given to Background Actors at check-in to be completed and turned in at the end of the day. This applies to both “Cash Extras” as well as those being paid by check

Working as background talent gives you a unique opportunity to get real, on-set experience while being paid. It’s often a valuable stepping stone to becoming a lead actor.

I hope this was really helpful! Be sure to share it with your friends and other actors. Keep reaching for the stars and following your dreams! xo Hunter

How To Be A Background Actor: The Complete Guide 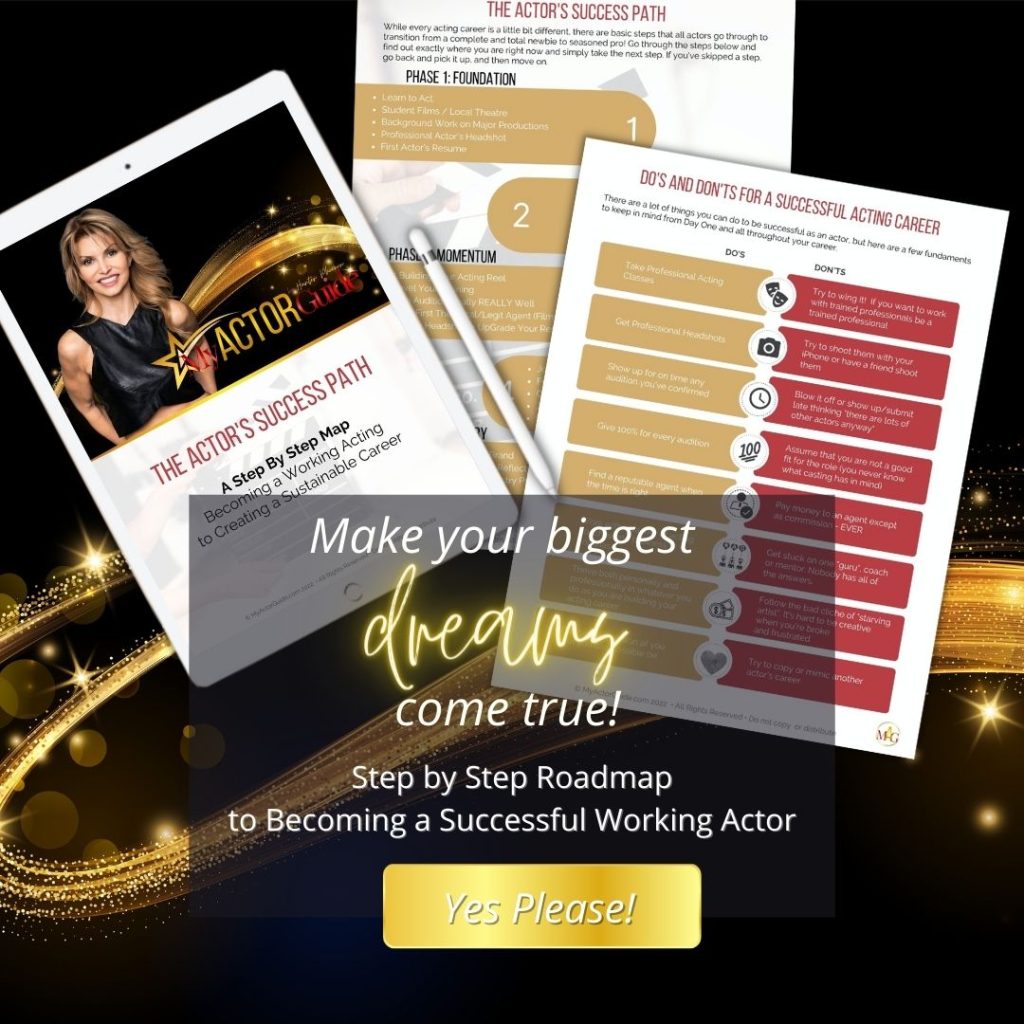 This website uses cookies to improve your experience while you navigate through the website. Out of these cookies, the cookies that are categorized as necessary are stored on your browser as they are essential for the working of basic functionalities of the website. We also use third-party cookies that help us analyze and understand how you use this website. These cookies will be stored in your browser only with your consent. You also have the option to opt-out of these cookies. But opting out of some of these cookies may have an effect on your browsing experience.
Necessary Always Enabled
Necessary cookies are absolutely essential for the website to function properly. This category only includes cookies that ensures basic functionalities and security features of the website. These cookies do not store any personal information.
Non-necessary
Any cookies that may not be particularly necessary for the website to function and is used specifically to collect user personal data via analytics, ads, other embedded contents are termed as non-necessary cookies. It is mandatory to procure user consent prior to running these cookies on your website.
SAVE & ACCEPT
wpDiscuz
0
0
Would love your thoughts, please comment.x
()
x
| Reply
My Actor Guide
5 Shares
Tweet
Share
Share
Pin5